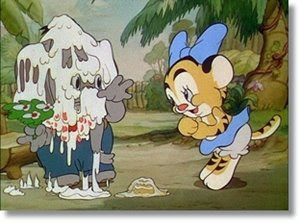 Elmer Elephant is a very effective but simple story. When the story begins, we see Elmer skipping along on his way to Tillie Tiger's birthday party. His timing is a bit off; he arrives just at the moment that Tillie has asked Joey Hippo to blow out the candles on her cake for her, and with his tremendous blow sends the entire frosting of the cake right onto the face of the newly-arrived Elmer.

It's fairly easy to see that Elmer is one of Tillie's favorites as she cleans off his face for him and then goes all gushy over his gift; a simple bouquet of flowers. Possibly it's a bit of jealousy from the other attendees (including one bear cub who bears more than a passing resemblance to a certain cartoon mouse) but when Tillie goes up to her jungle penthouse (to do what, we're not told) the other party goers decide to taunt Elmer about his trunk with a variety of disguises, including the ultimate insult of one monkey making a caricature of Elmer out of his rear end and tail!

Without Tillie to defend him. Elmer wanders off dejected, trying to find some way to disguise his trunk. But then he comes across Joe Giraffe, with an extremely long neck. He points out to Elmer that he's not the only animal in the jungle who might look a little silly, and points out a group of pelicans who give their best Jimmy Durante impression. Elmer begins to feel a little better, but suddenly there is an alarm! Somehow, Tillie's birthday party is going up in flames!

Elmer and Joe head off to the fire with the pelicans in tow to find that all the other party-goers have been able to do is run around like chickens panicking. There is some attempt to put out the blaze by a monkey fire-brigade, but the personified flames make quick work of the fire-ladder, as they do a makeshift trampoline the other animals try to use to get Tillie down from her penthouse. The pelicans are able to bring water because of the size of their beaks; Elmer, standing atop Joe Giraffe's head has the proper height to shoot out the flames with water from his trunk. Because of their physical peculiarities, Elmer, Joe and the pelicans are able to put out the fire, rescue Tillie from her precarious perch and save the day!

Elmer Elephant was well-received by the public and some Disney artists felt that it was an important step towards the pathos that would give features such as "Dumbo" it's charm. It was a remarkable step for Disney as Elmer was able to convey a variety of emotions, even though he had not a single line of dialogue in the entire short. It was also unusual for a Silly Symphony as it retreated from the standard form of using the music in the forefront. Although it does have a couple of musical numbers, the story takes center stage. Some, however, felt that the pathos wasn't enough and it had a sense of emptiness at it's core.

One who was disappointed with the way it came out was the original storywriter, Bianca Majolie. Majolie was an anomaly at Disney; a woman in the male dominated story department. Walt approved the first idea she submitted - an original story entitled "The Romance of Baby Elephant" which went into production in mid-1935. However, as it went through the story department, more slapstick ideas were added to the original charming story. It was the brutal aspects of the slapstick that Marjolie objected to but, being the "new kid in town", her objections went unheard.

Most of her ideas for characters and narrative were retained, however, including the moral in her words "that usefulness is more important than beauty ... that things that are not decorative may be extremely useful and should be cherished for that reason."
Posted by Patrick Malone at 7:52 AM