In lieu of a specific short of the week this time around, I decided to give a list of what I consider the ten best Disney shorts. They may not be the most popular, or the most historically significant, but just the ones that I enjoy the most, are the most entertaining, or for whatever reason.

Note : this list is subect to change at any time due to the whims of the author. These are only the top ten in my opinion; your mileage may vary. 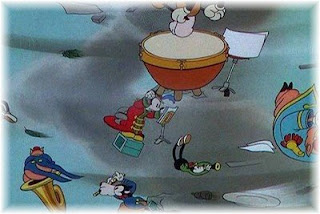 1 : The Band Concert : I think this would be at the top of any Disney lovers list. Mickey's first full length appearance in Technicolor also had great gags, some nice dramatic action, lots of tension between Mickey and Donald and a lot of subtle touches that you don't realize unless you almost watch it frame by frame. 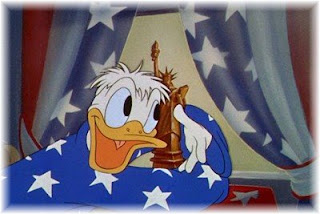 2 : Der Fuehrer's Face : I'll admit it; I've never been a big fan of Donald Duck (which is proabably why his sections of the website go untouched for inordinant amounts of time.) But this short is Donald at his best against a (thankfully, only seemingly) unstoppable foe. Plus it has the great opening song which became a big hit by Spike Jones. 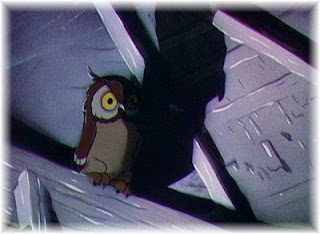 3 : The Old Mill : I've talked about this one before as the very first post in this blog, so I won't repeat myself too much here. But for animation, mood and drama, this short is as close to perfection as you can get. All without a single word of dialogue. 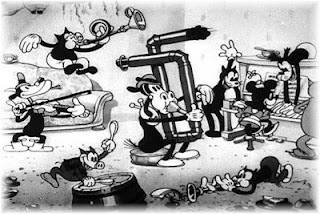 4 : The Whoopee Party : A lot of the early Mickey shorts were just singing and dancing shows which got tiring after a few minutes. This one doesn't. It's a party with everyone involved. The cops show up and they join the party. Even the house itself joins in the dancing. Everything is tuned in to the music and dancing so at the end when the house falls down around their heads, all they can say is "whoopee!" 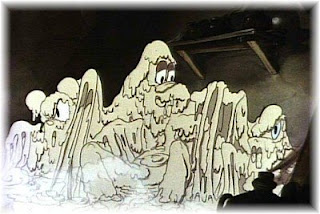 5 : Lonesome Ghosts : It's a toss up here between this one and "Clock Cleaners" but I give this one the nod from all the "trio"shorts just because of the way the gags set up. The house looks haunted. The artists were able to give it a real atmospheric feel that makes you think it could actually be full of spooks. And the ending is just a delight and doesn't feel forced at all. 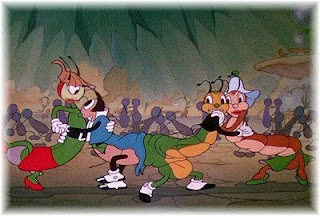 6: Woodland Cafe : This was one of the first shorts that Ward Kimball worked on. It was an homage to old jazz clubs of the 20's and 30's. This cafe full of jitterbugging bugs has a bucketload of style, and some crazy music that just won't quit. 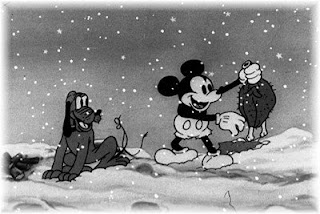 7 : Mickey's Good Deed : Here, Mickey is at his best. He's caring, self-sacrificing and the short (one of Disney's first Christmas themed cartoons) has a lot of pathos for those who deserve the better things in life. And very little for the ill-mannered Adelbert.

8 : Symphony Hour : Yes, you might have noticed that most of the shorts I consider the best revolve around music. That seems to be where the artists could really let themselves shine. There are few shorts where the plot is very involving and characterization can be such a subjective thing. But if there was music involved, it almost always made a top notch cartoon. This is no exception as the Spike-Jonesish shenanigans at the end was a omic highlight of the Disney shorts. 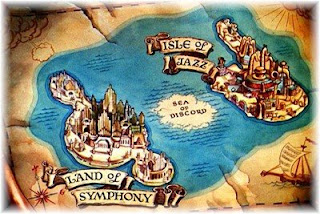 9 : Music Land : As if to cement the point made above, here is another one where the story is told almost completely through the medium of the music. And here, the medium is the message as the Isle of Jazz goes to wat against the Land of Symphony only to be joined by the Bridge of Harmony. 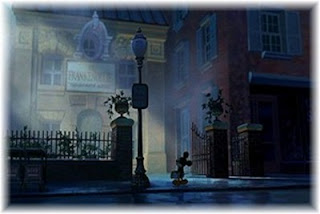 10 : Runaway Brain : This "late in the game" Mickey Mouse short was a shock to many, but a revelation to those who thought that Mickey had become too much of a cultural icon to be really interesting in the short format. Sadly, it was a one-shot deal, but it was an exciting break from his bland, nornal character.

That's it! I'd love to hear yours and the reasons behind them. Maybe if I get enough, I'll set up a special section of the website for them.
Posted by Patrick Malone at 5:42 AM

Good choices. Now if you could only work "Duck Pimples" in there!

Hmm OK I'll give it a shot... (in mostly random order)

Chicken Little (1943): My favorite Disney short of all.

Keep in mind a lot of this could change, depending on when you ask me next.

What? No "Brave Little Tailor"? What about "Suzie, the Little Blue Coupe"? What about "The Worm Turns"? That's it; I gotta compile a list. Much appreciated your inclusion of "Woodland Cafe" tho.