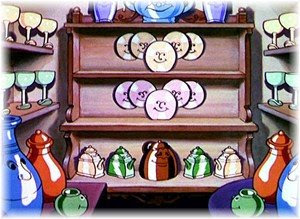 I had told myself that I wasn't going to feature another Silly Symphony quite so soon. And yes, I am updating early since the fiance and I will be heading to NYC for the weekend to catch "The Lion King"on Broadway. But while reformatting the site I rediscovered the 1934 short "The China Shop" and was struck by how the Disney artists made everything work together to achieve their goal.


The short begins by focusing on the proprietor of the store and Disney seems to spend an inordinate amount of time examining the character and his relationship to the shop. He is shown to care about his shop to the extent that even the positions of the figurines on the shelf draws his attention. This may seem like needless padding, but this is not a time wasting device at all, as we will see later. 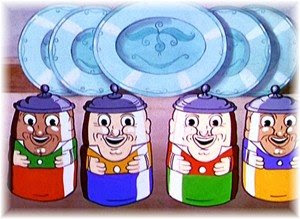 "The China Shop" unfolds on two levels and as the proprietor leaves for the night the second level reveals itself as the figurines and pottery come to life and begin to dance. I'm tempted to think that the Silly Symphonies series might have evolved differently had Ub Iwerks stayed with Disney. (Note the number of qualifiers in that sentence!) Most of the early Symphonies were simply dancing montages and it appears that this one will be as well.


But it is an abbreviated sequence. One of the critiques of a later Symphony, 'The Cookie Carnival" was that it had so many characters that you never had the time to get invested in one before moving on to the next. Here, Disney chose not to overpopulate the china shop, but instead focuses in on two figurines; a boy and a girl who dance (in a departure from the usual style) not for the camera but for each other. 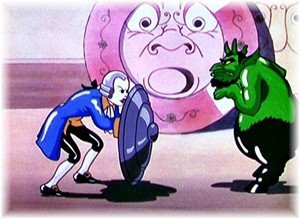 Another thing that strikes you as you watch the short is the way the backgrounds are used to help establish mood and character. These are not static backgrounds, but reflect the action on the screen. Where things are happy and jolly, the plates in the backgrounds are all smiles. When the demon is introduced, snakes are added (actually to the foreground.) As the action evolves the expressions on the plates become more fearful. And even as the fight progresses and shattered pottery is flying everywhere, the broken parts of the plates become part of their expressions as well.


The story within the story concludes as the proprietor returns the next morning. We can now sympathize with his view of the ruined shop because of the way his character was set up in the opening scenes. Contrast this to the lamplighter in "The Clock Store" who introduces the short, but is never an integral part of the story. This also gives the "story within the story" a context to work in and gives the short more depth than it would have had had it been just another "anthropomorphic items singing and dancing" short.
Posted by Patrick Malone at 5:23 AM