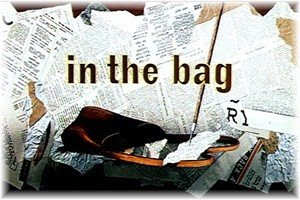 Herewith, your constant correspondent changes his mind. I mean, I'm going to be 53 in a few weeks, I think I've earned the right. And you kids stay off my lawn as well!

But ... Humphrey the Bear ... hmmm. I've written before that I thought Humphrey could have been one of the more major Disney characters had not the company closed down the shorts department after this "In the Bag" was concluded. But watching this one again I'm not so sure.


It's one of the most popular shorts that Disney has ever done, at least going by the number of comments and questions I get about it. Most of the questions are "What is the title of that cartoon with the song"do-do-do-do-do do-do-do-do-do BUMP BUMP?" People love that song. And if the entire short had revolved around that song it might have been a much better cartoon. But it seems to run out of steam after that and doesn't really give Humphrey much to do except move piles of trash around. I've already noted the unfairness of Humph having to go from cleaning up a small square to virtually the entire park. It says something for the quality of a cartoon when the high point is a cameo from Smokey the Bear.


I used to love this short, but it just doesn't do it for me anymore. Sorry, Humphrey ... but you had your fifteen minutes of fame.
Posted by Patrick Malone at 9:34 AM

I`ll have to disagree. Although I still feel the Humphrey gets treated unfairly in this short, if the series had continued he will have probably "win some and lose in others". Donald Duck lost a lot of time and was even treated unfairly by a lot of other characters. But at the end everybody loves Donald, and if Disney had not closed the shorts department, Humphrey would still be seen around the parks and in the merchandising, and loved! :-)

We'll have to agree to disagree then. Maybe it's because I've been dealing with most of the older shorts lately. But it seems that after the war there was a real gradula downward slide in quality; going from what can be considered works of art to some that seem to be on a par with Saturday morning cartoons. Ad I think the characterizations went down as well. Chip 'n' Dale seemed like they could fit into a number of situations. I couldn't see Humphrey doing much else besides finding ways to get around ranger Woodlore in his need for food. And we had Yogi Bear for that.

Yep, I'm also one to respectfully disagree, Mr. Chairman. After watching shorts liked "Hooked Bear", "Bearly Asleep", "Beezy Bear" and others, Humphry had the chops to be a contender had they given him a serious chance. Heck, they even did a couple of Mouseworks/House of Mouse shorts with him and Don and it still worked. Besides, any Disney director worth his salt could have varied the formula for more character development, a la the Classic Disney Characters. If nothing else, he'd be a solid antagonist for Don.