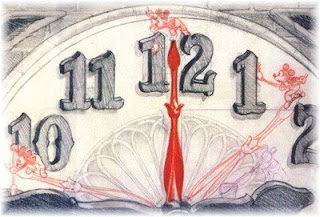 When I started this blog I thought that I would mostly feature shorts that were hisorically important or showed some insight into Disney's creative process. But every now and then it's good to feature one that's just fun."Clock Cleaners" is one of those. I've said pretty much all I wanted to say in it's entry on the website. But the Disney artists were at the top of their form in this short. From the almost balletic dance of Goofy's tightwire act to Donald's fight with the mainspring; this short has it all.

I had to laugh a bit at something else just tangentially related to this short. The Rev. Donald Wildmon successfully had a video compilation ("Fun on the Job") removed from Wal-Mart's shelfs because he thought he heard Donald saying a dirty word. Whether WalMart actually believed him or not is a moot point; it didn't stop them from bringing it back in for their bargain bins two years later!
Posted by Patrick Malone at 11:48 AM