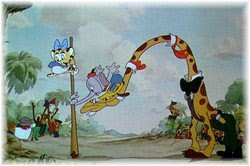 One theme that runs through a few of the Disney shorts (especially the later Silly Symphonies) is the idea of identity development. That is, that the lead character has to discover who he is and his place in the world. The paradigm for this idea is "The Ugly Duckling" made in 1931 and remade in 1939. The earlier version doesn't play much with the idea. It is simply the story of an outcast duckling who has to earn his place in his family by rescuing them from certain death. The later short, however, stays truer to the original story of a duckling who doesn't realize that he is going to grow into a beautiful swan.

"Elmer Elephant" is a good example of this. Elmer, teased unmercifully because of his big ears and prominent trunk is another outcast until he meets Joe Giraffe. Joe teaches him that he should be proud of who he is even though others may find him funny looking. And, indeed, it is because of his, the giraffe's, and the pelican's physically peculiarities that they are able to save Tilly Tiger from an all-consuming fire. 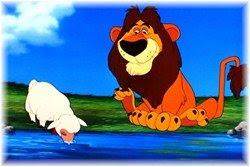 Another is "Lambert, the Sheepish Lion." A lion cub mis-delivered to a mother sheep, Lambert cannot understand why he is different from the other sheep. It is only after the flock is threatened by a wolf that he discovers his "lion-ness" and is able to use that to save the flock.

But the theme does have it's downside. There are also examples of where identity development shows characters trying to reach beyond what they were created for. In "The Country Cousin", Abner Countrymouse finds himself completely out of his element trying to fit in with the demands of city living and his attempts to grow beyond himself are thwarted. Of course, it would have also helped if he hadn't gotten drunk. 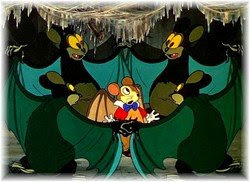 The theme reaches it's nadir, hoevever, in "The Flying Mouse." Here, a small mouse dreams of being able to fly. After saving a fairy, he is granted his wish for wings. But in the Disney universe that makes him "nothin' but a nothin'." It's rather sad that his dreams of reaching beyond what he was born with lead him to disaster. But it did give us a catchy little song, at least.
Posted by Patrick Malone at 6:38 AM