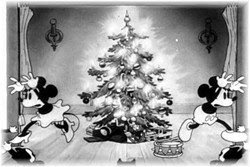 If "Mickey's Good Deed" represents the good side of Christmas, with Mickey's benevolence being rewarded in the end, "Mickey's Orphan's" shows the opposite of the spectrum.

It might be an interesting theme for another post, but the lack of parental responsibility seems to be an ongoing motif throughout the shorts. The kittens that Mickey rescues have a close brotherhood with the mice orphans that appear in "Orphan's Benefit" and "Orphan's Picnic" and both sets are as ill-behaved. Maybe, as some have posted, it was Mickey's fault for giving them presents of instruments of mass destruction, but throughout the short they make Mickey, Minnie and Pluto's Christmas a living hell. And even at the end they completely destroy their Christmas tree without a sympathetic thought about what they are doing. It's fairly humorous in a bent sort of way but it does tend to leave a bad taste in one's mouth. 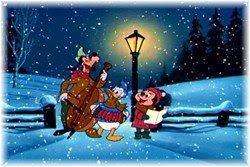 There are two valid connections that we can make. One is to the 1936 Fleischer cartoon "Somewhere in Dreamland" where the poor boy and girl are given their dreams come true, but are at least grateful for their patrons. The other is the 1952 Disney short "Pluto's Christmas Tree" where Mickey's tree is destroyed again (this time by Pluto and Chip 'n' Dale) but there is a trio of carolers afterwards who arrive at Mickey's front door to redeem the evening.
Posted by Patrick Malone at 8:18 AM