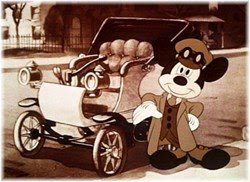 I'm reading Neal Gabler's biography of Disney right now (since my copy of Barrier's "The Animated Man" hasn't come in yet ... sorry, Mike ... it's next up!) One of the salient points that Gabler makes is how Disney's view of "Main Street USA" was an idealized version of his youth in Marceline, Missouri. And as much as all of Disney's shorts were idealized versions of reality, no where is his view of turn of the century romance and the times better seen than in the 1941 short "The Nifty Nineties."

Here was have a sepia toned introduction showing Mickey besides his Model T ... wandering through the park to the tune of "I Was Strolling Through the Park One Day" ... and then taking Minnie to the vaudeville show. Goofy rides by on a high wheeled bicycle as do all the ducks on a bicycle built for five. It's a rather idyllic scene. 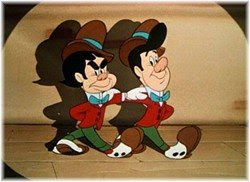 Mickey and Minnie's romance, however seens to be almost a subplot. The highlight of the short is the vaudeville show and it seems that the artists had a lot of fun putting it together. It begins with a slide show of the song "Father, Dear Father" about a young girl pleading for her drunken father to sober up and come home. It was really rather an unexpected subject for a Disney cartoon. The show continues with a song and dance from "Fred and Ward : Two Boys from Illinois." The characters are caricatures of Disney animators Fred Moore and Ward Kimball; oddly named since Moore was originally from California and Kimball from Minnesota.

But one of the best thing about the short is the asbestos curtain that is shown before the show begins. Most of the ads on the curtains refer to various Disney artists; so we have "Wilfred Jaxson Feed and Fuel," a reference to Wilfred Jackson, one of Disney's earliest animators. Also noted are "Clark's Confectionery" for animator Les Clark, "T. Hee Shoes" for storyman T. Hee, "Gen. J. Sharpsteen Dentist" for animator Ben Sharpsteen, among others. 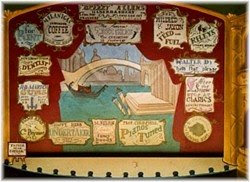 There is also one for "Walter D's Hats That Please", an obvious reference to Walt Disney himself. But one of my correspondents notes : It seems there is a hat manufacturer that uses the Disney name (I spotted their ads in the New Yorker Magazine, and it seems they been making hats longer than Walt has making cartoons) and probably Riley Thompson (or his gagmen) knew of this. So that gives that joke an extra edge.

It's a fun little short; certainly not one of Disney's best, and there's no real plot to it, but it's a nice pleasant way to spend seven and a half minutes.
Posted by Patrick Malone at 11:38 AM