http://www.disneyshorts.org/years/1936/mickeyspoloteam.html
First of all, I'd like to introduce you to a newer blog on the blogosphere. The Disney Films Project is the log of Ryan Kilpatrick's attempt to view every Disney short and feature film in chronological order and give us his thoughts and impressions on them. It's a very interesting project and it will be fun to follow him and see what he comes up with! 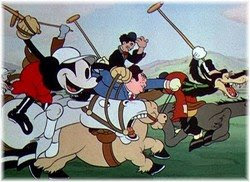 As part of transcribing and building the online Disney Reasearch Library I've been reading a lot of Don Graham's action analysis classes and Boris Morkovin's gag classes. It's interesting to see what works and what doesn't, but it's had an odder effect on me than I expected. To wit, I'm finding myself watching the shorts and finding what could have been done better and maybe getting a bit more detailed than I should.
"Mickey's Polo Team" is a fun little short and gave the Disney artists a chance to show off their cariacturing skills again after the success of "Mickey's Gala Premiere." Here, they don't overload the short with Hollywood caricatures (as they would later in "Mother Goose Goes Hollywood.") But neither do they give some of them a lot to do. Mickey and Goofy appear in the line-up at the opening and then are pretty much forgotten for the rest of the film. Since Mickey was based quite a bit on Charlie Chaplin, I would have loved to see them in a scene together. Goofy and Stan Laurel would have made an excellent pairing as well; Laurel was animated by Art Babbit who later gave Goofy much of his elastic personality. 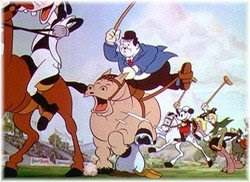 For me, the Laurel and Hardy sequence goes on too long and completely stops what should have been a frenetic and exciting film throughout. There's no real polo playing seen until almost the end. And too much emphasis is placed on Donald Duck towards the end when they had a cast of Hollywood stars to work with. One scene that was cut out which I would have enjoyed featured Mae West (possibly in her role as Jenny Wren) and the grasshopper from "The Grasshopper and the Ants" meeting. One can only imagine what that might have been like. And for some of the Disney artists, the ending gag came out of left field with no real set-up to it. So it feels like a showcase of individual episodes rather than a well-thought out storyline.
But these are minor quibbles for what is a thoroughly enjoyable short. And it leaves me wondering if studying anmation deeply robs us of something. The Action Analysis Classes and all the criticisms that Disney seemed to crave made the Disney artists better animators in the long run. But for me as a spectator, it makes me feel a bit like Mark Twain wrote in "Life on the Mississippi":
"Now when I had mastered the language of this water and had come to know every trifling feature that bordered the great river as familiarly as I knew the letters of the alphabet, I had made a valuable acquisition. But I had lost something, too. ... All the grace, the beauty, the poetry had gone out of the majestic river. ... A day came when I ceased from noting the glories and the charms which the moon and the sun and the twilight wrought upon the river's face. ... All the value any feature of it had for me now was the amount of usefulness it could furnish toward compassing the safe piloting of a steamboat. ... [I] sometimes wonder whether [I] have gained most or lost most by learning [the] trade."
Posted by Patrick Malone at 8:01 AM

Thanks for the kind words, Patrick. Mickey's Polo Team is so good. I've watched it a couple of times with my kids and it really holds up. This is true of all the Mickey color shorts, as they are as requested in my household as any current cartoons.

Brilliant observation! I also find that when things are technically analysed, they loose secret, or mystery, of integrity, if you want. I first noticed that with cooking. If you eat something delicious, knowing the recipe, that is, reverting the dish to each particular ingredient, detracts from its taste, somehow, or from the "magic" of it.