She Blinded Me ... WITH SCIENCE! 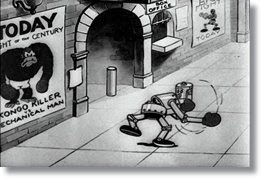 First of all, I should apologize for not having updated in quite a while. School work and the redesign of the site as part of my classwork has kept me pretty busy lately. Everytime I think I've got the site nailed down with a new interface and look, I find something else that I want to do with it. But I think I've got the new deisgn pretty well finished and hopefully I can soon start the laborious prospect of changing the entire site over to the new style. It's a big project because I'd like to finish up the project of making sure that every short that is available on DVD has screenshots shown for them and that takes some time to do.

I was thinking about that during a visit to the Boston Museum of Science last week; the way science has enriched our lives and made them easier (in some ways ... in some ways much more complex.) Walt Disney himself embraced technology and was always looking for new ways to do things, even going so far as to invent the multiplane camera to give his films a three dimensional aspect. Ub Iwerks was also instrumental in perfecting a number of cinematic processes for Disney animation and live-action throughout the years. 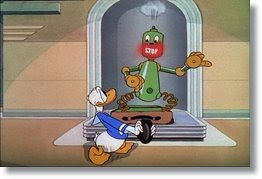 But it's also one of the ironies of Disney that while he embraced technology, his characters always seemed to have a difficult time with it. In "Mickey's Mechanical Man" Mickey builds a boxing robot which goes completely haywire and refuses to work unless a car horn is played nearby. Goofy's "One-Man-Band" in "Mickey's Amateurs" gets the better of him as he's unable to control it. And much later in the MouseWorks shorts "Mickey's New Car" and "Mickey's Mechanical House" Mickey is presented with a new version of his old car and house which he is unable to deal with and in the end returns to his older, more "organic" versions.

But during my "Museum of Science" tour I was reminded of Donald Duck's tour of the Museum of Modern Marvels in "Modern Inventions." Here is well-intentioned science gone amuck. Donald is bested at every turn by contraptions that, well, you can't exactly say that they perform badly or go haywire. But their performance seems to take over Donald's life rather than enhance it. 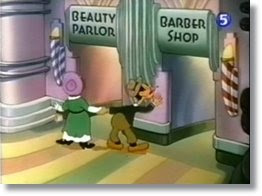 The flip side of this is presented by another studio, Fleischer Studio's 1938 short "All's Fair at the Fair." Inspired by the 1933 Chicago World's Fair otherwise known as the "Century of Progress International Exposition" it showed Elmer and Mirandy, two country folk, being impressed by technology that worked well enough to get them ready for a big dance. It's a charming film, and it's sad that Disney, while in real life pursuing technological advances, never let his characters enjoy the benefits of science. But in a larger sense, that's probably what made them more organic and down to earth.
Posted by Patrick Malone at 4:19 AM

That's sooo true...I like the irony you pointed out here. Noticed it as well...

Btw, some of the links have stopped working on the characters' section =P I tried to access to some shorts from Donald's page and was unable to.

Try it again ... just a minor brain freeze on my part. It should be okay now. Thanks!