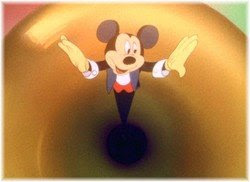 I keep meaning to post about "Symphony Hour" but for some reason never got around to it. I should have, because it's probably the second best short that Disney ever did. (Did I give it #2 in my 10 best list? I can't recall.) It returns to a familiar theme that Disney seemed to mirror in his own life; the dichotomy between the sacred and the profane. What philosophers like to call the reconcilliation of opposites. In Hegelian Dialectic; thesis and antithesis finding it's resolution in synthesis.

Too deep? Yeah, possibly. But we'll get back to that.

Here Mickey, as in "The Band Concert" is the leader of his band of musicians. But in this case, instead of being a neighborhood band, it's a full symphony orchestra. And instead of Donald Duck being the rascally antagonist, here he's a full fledged member of the band as the percussionist. Pete makes an appearance, out of character, as Sylvester Macaroni; patron of the arts and the big money behind Mickey and his orchestra's big debut.

The rehearsal goes well but as one might expect, nothing in a Disney cartoon can go well for long. (There are notable exceptions to this in a few of the Silly Symphonies.) Goofy is in charge of making sure the instruments get to the stage on time and having missed the elevator they all go plummeting to the bottom of the elevator shaft and are promptly squashed.

What happens next is worthy of Spike Jones, although Jones (as far as I know) had nothing to contribute to this short. The orchestra valiantly plays on with their damaged instruments giving the orchestral music more of a jazz feeling than the lush classicism of the original. Jones once said that one of the more difficult things about his music was that you couldn't just use any car horn, it had to be a certain note of car horn or else it woudn't have fit with the music. Here, the spotlight is more on the Disney musicians who make every misplaced note sound like it was written that way. 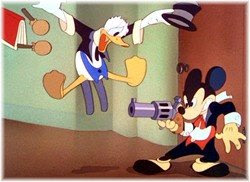 One of the most surprising parts of the short, though, shows Mickey playing completely out of character (as least for what I feel Disney himself had in mind for him.) Donald, completely disgusted with the way the music is being played and his own difficulties in getting his instruments to work, packs up and tries to leave. Mickey heads him off at the pass and actually pulls a gun on him forcing him back to work. It's a great surprise and one that works well, especially considering the bland non-entity that Mickey would soon become. It makes one wonder what might have happened if the artists had been allowed a little more freedom to develop Mickey's personality in this way.

(It's also amusing to note that the way the music is being played that makes Donald want to leave is exactly what he would have wanted to hear it back in "The Band Concert.") 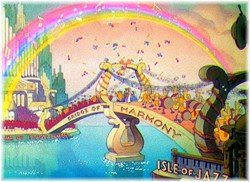 The sacred and the profane. Classical and jazz. Pete is distraught in his listening box seeing his reputation as a patron of the arts, and the money for his newest find slip out of his grasp. But he's instantly cheered when he hears the cheers of the audience. And here is where we see the reconcilliation of opposites that I alluded to earlier. Where both classical and jazz could co-exist in the same sphere; a theme that finds it's purest and most obvious revelation in the 1935 Silly Symphony "Music Land." But also in the ending of "Fantasia" where the demonic "Night on Bald Mountain" is paired with the sacredness of "Ave Maria." And to a lesser extent in the anthology films of the 1940's where classical pieces like "Peter and the Wolf" were paired with pieces by Benny Goodman.

Lastly, one aspect that rarely gets mentioned when talking about cartoons is the editing. Watch the editing in the opening sequences as the orchestra is playing and the camera shifts from instrument to instrument. The sequence begins with a reflection of Mickey in one of the brass instruments, goes from player to player, finally revealing Mickey on his podium. The editing glides from one scene to the next as the music flows; contrast this with the ending where the music is more chaotic and the editing is sharper and less liquid. It's a wonderful sequence and really shows what good editing and scene planning can do for the effect of a short.
Posted by Patrick Malone at 6:23 AM

- Radio Hour was a wonder film. Great action and twists. Most don't remember that there were sponsor rooms where the sponsor could watch the program -- like a sky box at a game.
- Band Concert was good and had some nice bits, but Radio Hour had more depth. My thoughts, anyway

It is something what you say about the Symphony Hour. We have an affinity of thought. I said in my book that Disney re created the limit between the sacred and the profane, what to respect and what to use, for the sake of his creativity. Considering Disney a genuine mystical, what is a better account of the mystical than that?