There is a fairly bizarre backstory to the 1935 short "The Golden Touch." 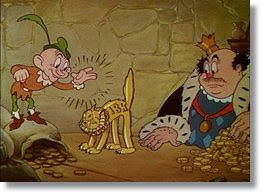 Walt Disney thought his animators had lost it. They didn't know how to tell a coherent story and they didn't know how to bring his ideas to the screen. Disney hadn't personally directed a short since 1929 but he decided to take his two best animators, Fred Moore and Norm Ferguson and, by George, he was going to show him how it was done.

Their project was an adaptation of the old tale of King Midas, who loved gold so much that he is granted his wish that everything he touches would turn to gold. As delighted as he is at first, the tale takes a tragic turn when he finds that he can no longer eat since his food turns to gold; he is robbed of affection since he tries to pet his cat and it turns to gold. (In another version of the story, it is Midas's daughter that is turned into gold; perhaps a too horrible scene for the Disney artists to consider.) Eventually, he learns his lesson and the touch is removed from him, leaving him penniless, but at least now able to enjoy the pleasures of a simple hamburger "with onions!" 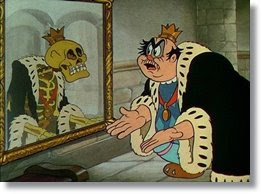 Despite Disney's belief that he was going to show his staff how to produce a quality cartoon, the short was a dismal failure, both at the box-office and among the Disney staff as well. There were many theories floated as to why it failed to succeed. For some, the characters themselves weren't defined well enough. The character of Midas isn't given any background upon which to contrast his sudden love of gold. There are no other characters to play him off against and he comes off as almost completely unsympathetic. (Watch the short ... there seems to be no other citizens of his entire kingdom ... except the cat.) Goldie, the magical creature who gives him his magical gift is also given no raison d'etre for showing up, although I suppose the same could be said of the Blue Fairy from Pinnochio. In all, the audience isn't given much of a reason to care about Midas, either one way or the other. We no more rejoice when he's given his golden touch, nor feel any real relief when it's taken back from him.

So, in the long run, this was one of Disney's few artistic failures; a minor blip in an otherwise stellar career. But it grated at him,and his staff knew it. It was said that after this, the best way to get Disney's goat was to mention "The Golden Touch."
Posted by Patrick Malone at 4:27 AM