I will be taking a short three week break from working on the site. To the chagrin of the female population out there (or maybe the relief!) I have found the love of my life and will be getting married next Saturday and then off for a two week honeymoon.

By all accounts Walt Disney himself had a happy marriage. But in another of those Disney ironies, he rarely allowed his characters to have one. Enough has been written and theorized about the prevelance of one-parent families in Disney features, but they were more often than not a product of the original stories Walt was working with. There is an ongoing controversy as to whether Mickey and Minnie were married. Disney says yes, they were. Quite a few of his animators preferred to think they were not. Disney's view, as always, takes the upper hand. But in the shorts, at least, they were always seen courting and never as husband and wife.

Except in their dreams and unfortunately, dreams didn't always work out exactly as they wished. In the 1932 short "Mickey's Nightmare" Mickey dreams that he is finally getting married to Minnie. And the marriage itself seems to be okay ... until the kids start showing up. Disney seems to delight in the destructive ability of small kids in large numbers and this group is no exception. They tear apart the house using Pluto an a draught horse and tying Mickey to the floor so they can continue his wave of destruction. 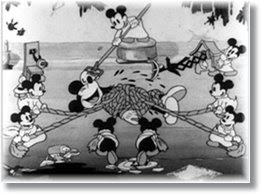 Is Disney commenting on marriage or on ill behaved kids? The kids show up in a few other shorts as orphans and are just as bratty and uncontrollable. Marriage itself has little to do with it. One of my contributors wrote:

"It's interesting that this cartoon depicts marriage from Mickey's point of view and not Minnie's. In other words, we see the man's perspective and not the woman's. The storks delivering babies are used to symbolize that they are having kids. We don't see anything like Mickey and Minnie actually having kids the normal way. ... It's almost like Mickey blames Minnie for all these kids that the storks are delivering. It's not his fault that all these kids arrive; it's Minnie's fault. The idea that somehow Minnie is to blame is suggested by the scene where Mickey comes into the house and sees Minnie sitting at a huge table with all those kids. It's like Mickey has had nothing to do with it. I know that this cartoon wasn't meant as serious social commentary; it's just something I picked up on when I saw it for the first time." 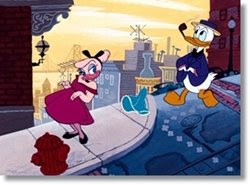 Donald Duck's dream marriage doesn't fare any better. In the 1954 short "Donald's Diary" he dreams of what marriage to Daisy would be like and his dreams take a dramatic turn. Far from being the pleasant, happy "Ozzie and Harriet" type of life, he finds himself stuck with household chores, facing Daisy without her makeup, and all the other things that actualy make a well-functioning couple work together well. Did Donald expect his life to be the same? Donald usually has unrealistic expectations of things, but in this case just normal married life appears to him as such torture that he prefers the rigors of the French Foreign Legion to marriage.

"As a woman, I find it kind of funny that both of these cartoons portray marriage from the man's point of view, not from the woman's. There's a scene where Donald tries to sneak out of the house and Daisy grabs him by the neck and puts him in the stocks so he will do the dishes. He goes to read his paper and she takes his chair and tells him to take out the garbage. I don't know of any man alive who enjoys taking out the garbage. It's very interesting that Donald's experience of a bad marriage with Daisy involves being forced to do the housework like a slave. Who was the one who traditionally did all the housework? The wife, of course. When the man has to do the work he doesn't like it. He feels like he's being treated like a slave. But it's perfectly okay for him to expect his wife to do it. After all, housework is woman's work, isn't it? Yeah, I'm being sarcastic. This cartoon illustrates the classic double standard. Men were expected to go to work and women were expected to do housework and take care of the kids. There was a distinct division of labor."

So, unfairly or not, marriage takes a big hit in the Disney cartoon world. Should this serve as a warning for anyone (like myself) ready to put on the bonds of matrimony? Of course not, in the same way that Goofy's cartoons shouldn't be seen as instruction manuals. But it does go to show a lot of prevailing male additudes towards marriage and that things hadn't changed much from the 30's to the 50's.
Posted by Patrick Malone at 4:29 AM

Adding to the Disney shorts' male vision of marriage, not many years ago I saw on my Dad's wall the saying " Men accept marriage for the women, and women accept men for marriage". I think the roots of the view that marriage is better for women than for men is Latin. Why? Latin men, in general, have an aversion to faithfulness. It is deplorable. ANd even though Disney, in the shorts, shows, on the male point of view, the hassles of house work and caring for brats, one has to remember that the features' happy ending concerns the finding of definitive love. On that note, I wish a most, happy ending marriage.

Correcting: I wish YOU Guys a most happy ending marriage.

Congratulations with your marriage from Holland!!!